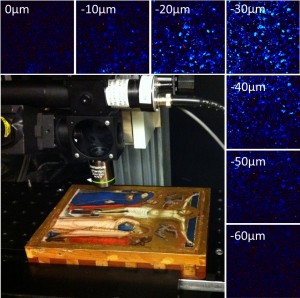 Imaging Puccio under a new light.

The Art Imaging Initiative began as a pilot project to determine the utility of pump-probe microscopy in imaging historical pigments funded by the Center for Molecular and Biomolecular Imaging.  It then grew into a partnership with the North Carolina Museum of Art, then the National Gallery of Art, and has recently received federal funding support in the form of NSF Award CHE-1309017 under Prof. Martin Fischer.

The techniques used to explore tissue and artwork are surprisingly similar, and pump-probe microscopy is excellent for performing three-dimensional imaging of both.  The key is depth.  Just as the structure of human tissue changes as you look deeper below the surface, the structure of a painting changes as you look through the visible layer to see what lies beneath.  By coupling two different colored pulses with a variable interpulse delay it is possible to take 3-D chemical specific images of historical art pigments.

The project was initially intended to explore historical pigments, and that continues as part of the NSF award.  The pilot program is now looking at the utility of pump-probe microscopy in other media of import to cultural history.  Pottery is one direction, and it may be possible to determine the temperature and conditions in which a piece of pottery were fired.  Plans are also in place to explore parchment as a future direction. 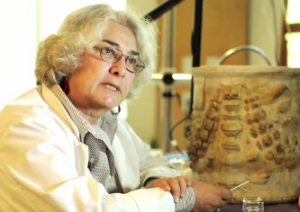 Also working on this project, fine arts conservator and CMBI faculty member Adele De Cruz has used the laser technique she developed to remove waxes, dirt and other incrustations from the surfaces of ancient paintings, sculptures and other works of art.  The crowning achievement being the cleaning of a Roman funerary urn, circa 1st century CE.  The urn (seen at left with Prof. De Cruz) was cleaned using an Erbium:YAG laser over the course of 6 months.

3D Imaging Reveals How Paintings Were Made | Science

Laser Looks Under the Surface of Art | Nature

Art Under a New Wavelength | UNC-TV

New Use for Laser in the Art World | phys.org